You are here: Home / Writing Tips / A Problem With Writing Research 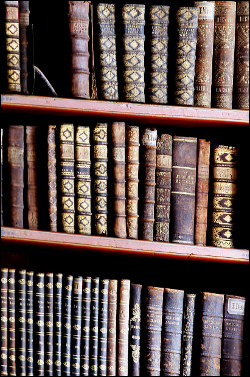 “A man will turn over half a library to make one book.”
– Samuel Johnson

I like making up most of what I write. Where possible, everything comes from my head. When I have to research, I try to spend the least bit of time researching and focus on the story I want to tell.

Research Has Its Place

I’m not knocking research — it definitely has its place. If you’re writing something set during the turn of the 19th century to the 20th, chances are, you’re going to have to research.

My second novel takes place in Chicago in the 20s. I had to research quite a bit. My next novel will take place from the same time through the 50s. I can’t get away with not researching.

The important thing when researching for a story is making it appear that you didn’t have to research a thing. Here’s what I mean…

Avoid Too Many Details

One of my pet peeves as a reader is when it’s clear that the writer is dumping into the story unnecessary things they discovered while researching.

Sometimes things read like a writer was kind of like, “Dammit, I spent more time researching than writing, and I’m gonna cram as much of what I found into this story so all that time I spent researching every little thing doesn’t feel wasted!”

But just because you turn over half a library to write a book, it doesn’t mean you have to put half a library in your book! When you do, things sound like this:

“She connected her Nikon D3x digital camera to the hexagonal quick release camera plate and locked it on her 3D Super Professional 3-way head that was already attached to her Manfrotto 057 Carbon Fiber 4 Section Tripod. She knew the Nikkor AF-S 300 mm F2.8G VR lens would get the shot that she lined up from the bird blind at the edge of the lake.”

Even the biggest fan of camera gear is going to be tired after reading that. Aside from being an info dump, there’s still a problem…

When you spend so much time fixated on gear and other things, you often overlook more important things.

It’s easy to jump online to get information, but encumbered passages aside — even after months of research — it’s still easy to make a mistake like the one above. It’s easy to think, “This photographer character of mine has done well,” so going online and finding expensive gear seems to make sense.

You look at tripod heads and pick the big, bulky expensive one someone in a studio might use, instead of the lighter, quick-to-adjust head somebody in a bird blind would probably use.

You pick it because it seems like the most impressive one to you — and that’s understandable. Your best bet instead of assuming, though, is finding a photographer and chatting with them. You’ll find out little things they do that you may not easily find online that can be dropped into a story without jarring the reader’s attention; little things that will make other photographers grin because you mentioned something photographers actually do, instead of writing a passage that reads like a parts number catalog.

What If You Can’t Talk?

If you can’t talk to experts, err on the side of less is more.

In the example above, mention just enough to make it clear the photographer is a professional. Or better yet, show the reader they are by the things they do and the reactions of those around them.

If you mention they’re working on an assignment for National Geographic — in most minds — you’ve more than established their credentials as a professional. At that point, you’re free to focus on what matters most: the story!