You are here: Home / Miscellaneous / A Writer’s Environment 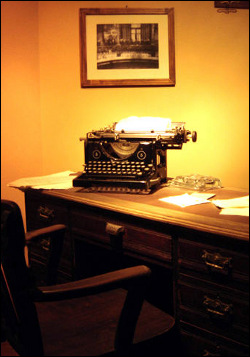 Does a writer’s environment matter?

If a writer needs certain conditions in order to write, are they setting themselves up for failure?

Should a writer be able to write anyplace at anytime?

Reading a blog entry called “The Where of Writing” on Paul Lamb’s Lucky Rabbit’s Foot got me thinking about something that’s never too far out of my mind.

I’ve conditioned myself to write pretty well on the fly. Whether it’s bringing my laptop to work, blocking out the sounds of the cafeteria with headphones, and throwing down an hour of writing during lunch or writing in a notebook as I run errands, I’m pretty good at writing anywhere.

I don’t need things around that inspire me (being able to write is inspiration enough). The right tools are nice, but if all I have is a napkin and a marker, I’ll figure out a way to make it work.

This isn’t to say that I like writing on the fly, but I know I’d be limiting myself to only write in the right place at the right time.

The Effect Environment has on my Writing

I wrote my second novel almost entirely during lunch breaks in a very  busy cafeteria at work. I was that weird guy in the corner with the headphones on and always writing something.

But in those hour-long chunks of time, I got a draft of a novel done.

The problem: when I read the novel, it sounded like something written in hour-long chunks of time. By that, I mean it didn’t go as deep as I prefer to go with my writing–not that I’m a literary writer. But it was clear that it wasn’t the best thing I wrote. Still, during the second draft, most of the hurried “just get the plot down” feel was polished away and it became something that sounded like I had plenty of time to write it.

The final draft of the last novel I wrote was written when I had nothing but time. And it sounds like something written with all the time needed. By that, I mean that it is much deeper than anything else I’ve ever written; it’s something that ended up exactly as intended.

I’ve never been more proud of something I’ve written.

The Benefits of Fast and Slow

I read some novels that have a cadence to them I envy. They click along at a great pace and have a spark and hipness to the dialogue that I envy. Often with books like that, I find out the writer wrote whenever they could. If it was 10 minutes while their kids were quiet or something jotted on a scrap piece of paper in a cab, it becomes clear to me that part of what I like about some novels is that they are a bit hurried and lean in their prose and dialogue.

Then I can read a John Irving novel and lose myself for weeks. Irving is a slower writer, content to take his time to create dense prose, rich characters, and dialogue with purpose. There’s a confidence in his writing that comes from years of being a writer, sure…but also from taking his time and not letting go until he’s written the novel he intended. From interviews I’ve read and watched, Irving doesn’t write with distractions.

Neither way of writing is better or worse. While I love John Irving, one of his teachers who just so happens to be another favorite writer wrote in small chunks. If all Kurt Vonnegut had was a napkin, that’s what he wrote on. Scraps of paper; anything–it was all fair game and eventually assembled into a novel.

You can feel the environment of each writer in what they wrote and write.

Looking at my second novel and my last novel, I can see the effect of environment on what I wrote. My guess is most people would say, “Sure, environment matters.”

So I guess the bigger question is, if environment matters, how important is it to put things off in order to write during your ideal conditions? At what point does demanding a certain set of circumstances inhibit your progress–or improve it?

What do you think? Do you have to write in the same place everytime, or can you write anywhere at any time?