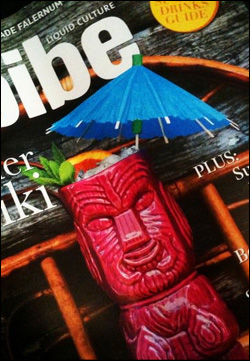 Jennifer Colliau, founder of Small Hand Foods, is featured in the latest issue of Imbibe Magazine.

“Who is Jennifer Colliau, and what does she have to do with writing?” you might ask?

Looking at the sites I linked to, it might seem like she has nothing in common with writing. She has studied the craft of woodworking, and she makes custom syrups for fine cocktails. She tends bar and stays very busy pursuing the things that excite her.

So what does she have to do with writing?

Nothing, necessarily–but I enjoy reading about people who obsess over the things they love (like many of us obsess over writing). After an article discussing Ms. Colliau’s detail in all she does (her small-scale syrups business doesn’t bring in much profit, so she still tends bar and does other things to make ends meet), she sums up why she doesn’t take the easier route and create things that would give her better odds of making money:

“That’s not to say I couldn’t make a good limoncello or crème de cassis, but it’s not that exciting to me; and if I’m not going to make that much money at this, it better be goddamn exciting.”

When people see what she does, instead of listening to how excited she is about it, many jump straight to, “You should make money doing that!” (and then proceed to tell her how she should do it).

When many people see what my wife does and finds out that she doesn’t make money doing it, they think she’s insane for spending time on something she loves instead of trying to turn it into the way she earns a living.

Your Money or Your Life

I’ve read more than a few personal finance books in my time. One of them that sticks out is Your Money or Your Life.

While the book becomes quite repetitive, I liked it because it’s one of the few financial books I’ve read that stresses valuing your time and standing firm on the things that mean the most to you. In short, the message is, “Your life may be short; be secure, but more than that–do what excites you and work toward living that life.”

I’m working overtime on a project of work right now, but I’m not stressing about it because I know at the end of my life, nobody’s going to appear at my side saying, “All that overtime you worked defined the person you were.”

It’s the times doing what excites me that will.

The Excitement of Writing

I generally stay quiet about what I’m up to with writing around many people. As I continue getting rejections that say, “You’re a very talented writer and I liked this, but it’s not quite mainstream enough,” I know if I discuss things with most people, I’ll hear what I’ve heard before: “Well then write what’s popular!”

When these people complain about not making as much money at their jobs that don’t even vaguely excite them, I fight the urge to say, “Then do something that pays more!” Thing is, that only covers half of their argument toward me–I’m at least excited about writing, whereas they are anything but excited about their jobs.

For so many people, everything is about money…even if it means never doing what you want to do in life.

“You Should Write a Vampire Story.”

I’ve had people tell me that I should write a vampire romance because, “They sell!”

Paranormal urban romance doesn’t appeal to me one bit. (That’s not a knock on the genre–I think people should write and read what they want, and if vampires are your thing, it’s what you should write–but I have different preferences in the things I read and write.) Even though people are making money writing paranormal romance right now, it doesn’t excite me.

To write “what sells” would be like Jennifer Colliau putting another limoncello on the market, instead of what excites her.

I write what excites me; there’s no better reason to write than because you want to.

Whether you’re creating the writing equivalent of yet another limoncello or crafting the equivalent of some long-forgotten ingredient found passed down through decades, be excited about it, or don’t do it!