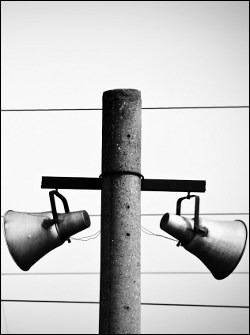 “I think it’s bad to talk about one’s present work, for it spoils something at the root of the creative act.  It discharges the tension.”
– Norman Mailer

My wife and I have a rule: I’m not allowed to talk about a work in progress.

If I have something I need to talk through, I have a writing group I can go to. (But really — I don’t talk about story details with them, either.)

I don’t talk about what I’m working on because then the story’s told.

How can I know if something works if a reader knows what’s coming?

Why Do We Talk?

Usually when we want to talk about a story it’s because we’re not being that productive. We want that rush that comes from doing something creative without doing the actual work!

It’s much easier to talk about a story than to write a story; I hear people talk about ideas all the time.

If you find yourself wanting to talk about stories all the time, step back and look at your production.

We all have that need to get a story out, and if we’re not writing stories, we tend to talk about them — even though the satisfaction from talking about ideas isn’t the same as actually finishing a story.

If you genuinely have to talk something through, find one or two people who understand what you need and talk about just the one thing that’s giving you problems. Don’t talk about anything else because the moment you do, you give away more than just what happens — you give away the reason for people to read what you write.

Why would I want to read your mystery if I know who did it, why they did it, and what happens to them in the end?

There are more people who talk about ideas than people who actually finish things.

Keep quiet, stay productive, and be the person who hands over a stack of finished pages instead of lungfuls of hot air…