You are here: Home / Miscellaneous / What Do Writers Owe Their Audience? 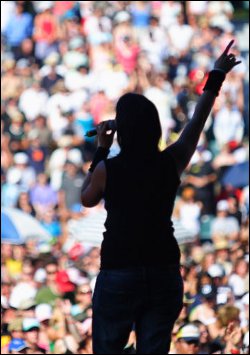 On Wednesday, I wrote about Snooki’s new book and the reaction it’s caused.

Snooki’s deal has bothered more than a few people out there. (I can sympathize; I just don’t think it’s worth the effort to go on and on about it because it’s not going to stop cut-rate celebrities from getting book deals…or stop me from writing.)

I had a great reply to the entry that resulting in my longest, most babbling reply on The Juggling Writer yet! I walked away from the reply thinking about how yes — in many ways it doesn’t seem fair that Snooki “wrote” a book on a whim, while the rest of us toil away.

But it’s not my place to say whether or not Snooki has the right to work with a ghostwriter to crank out what I’m assuming is a crappy book (I haven’t read it, so I can’t say with certainty that it sucks). I tried reading Twilight and thought it was cringeably bad, but others enjoyed it.

But here’s the thing: accounting for taste, or not — if people write something others like to read (or have a ghostwriter write a book based on your loose ideas), haven’t you done your job as a writer?

Literary criticism aside (because with Twilight and A Shore Thing, we’re not talking literary fiction), isn’t the goal of some books to simply entertain?

I loved all the Harry Potter books, but I don’t think they’re particularly well written. Still, I had a blast reading the seven books. I’ve read piles of books that weren’t literary masterpieces, and they’re up on the shelf with what I consider actual literary masterpieces.

The whole Snooki thing got me thinking about what we as writers owe an audience.

Do we, as writers, owe anything to an audience?

If we must write something for ourselves, we should write it with no care about anything beyond what’s needed by the act. (If writing for yourself is your thing.)

If we’re writing for money, though, do owe an audience something? Do we need to consider the person on the other end as we work through our drafts?

I think we do; maybe you don’t. (I’d love to hear why you don’t.) At the very least, we owe it to the audience to write the best book we can write in the time we’re given to write it.

But “best” is a subjective thing. My best may be a pile of crap to you…even though it’s loved by others.

Unless you write for yourself and only yourself, you owe at least something to your audience — even if the audience is one other person.

The moment we decide, “I want others to read this,” we at least owe those others a story with them in mind.

Perhaps we don’t owe them what they hope we’ll give them; I’m a fan of writers who try new things, even if they sometimes don’t work for me as much as with other books they’ve written. Perhaps the best we can do as writers is write the book we want and find the people who will like it — not considering the audience at all as we write.

But in general, I think it’s best to write books with an audience in mind.

Why Consider An Audience?

When we consider an audience, we often consider every little aspect of what we write, knowing that no matter how much we strive for perfection, there will be those who tear apart what we do. But barring the people who will always see the bad, even in the things they love, I know when I write with the hope that others will read my stories, I’m more likely to care about all the elements in that story.

I care about the characters even more…

I care about the setting and time even more…

I care about the plot even more…

Knowing that somebody else will be reading what I write, I owe it to those people to make sure there are no plot holes in my story. I owe it to an audience to be entertaining if that’s what I know they are expecting. I’m asking a person to take time out in a hurried society and ignore all other distractions for hours and hours. If I’m writing something literary, I owe it to those readers to elevate my words beyond those in your average thriller. And if I’m writing an average thriller, I owe my audience a book that will keep them turning the pages long after they vowed to go to sleep at night.

Simply put: if I’m writing with an audience in mind — if I’ve chosen to make money with my art — [on some level] I owe it to that audience to deliver what they expect.

What Does Snooki Owe?

Which brings us back to Snooki and why I care less that she got a book deal.

If Snooki has fans who want to buy her perfumes, jewelry, or whatever she’s hawking (again, assumptions on my part, but  flash-in-the-pan celebrities seem to like milking the cash with their own lines of clothing, scents, and jewelry), she’s giving them what they want. And…if they are willing to buy a book based on ideas from the pouf-head, why let it bother us?

When I was younger, I loved that I could buy Star Wars figures; George Lucas gave me what I wanted. The comic books I read delivered on their promises of super-powered action, and later — on pushing the boundaries of what I thought the medium was all about. Punk bands gave me energy, but still never moved me like Haydn’s string quartets.

Snooki’s book will either tank, do all right, or sell. No matter what happens, I don’t care because it’s not my thing.

But if it’s her audience’s thing, she’s given them what they want, and I don’t see anything wrong with that — tacky as the book may be.

What Do You Think?

Do we owe audiences anything as writers, or should we write whatever the hell we want and expect the masses to read it?

Does Snooki’s book portend the end of publishing as we know it, or is it just another book in a long line of soon-forgotten celebrity books?

What do we owe our audience…if we owe them anything at all?