You are here: Home / Artists / Monday Motivation: Learning from Musicians 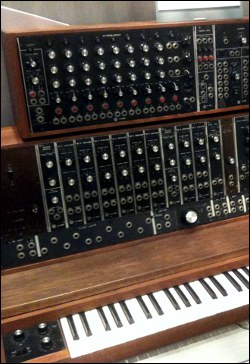 We’ve always supported what the other is up to, even though Brent’s always been focused on music, and my focus has always been on writing.

Being friends with Brent, I’ve seen that no matter what one’s creative obsession, there are many parallels about what works no matter what you are doing creatively.

Brent’s in a band called Folio, and he was recently interviewed on gearwire.com about synthesizers.

That may not sound like an interview of interest to writers, but there are several points made in the interview that apply to writers.

“When writing, we tried not to get bogged down in scrolling through 400 synth patches and manipulating the top five contenders to match what we’re hearing in our heads. We saved those torturous sessions for after the parts were finalized!”
– Brent Meyer

Just like it’s natural to stop while writing to do research, rework a scene or dialogue, or chase one of hundreds of distractions, there’s time for it later.

When you’re creating something new, the best thing you can do is keep moving, and get picky later.

Nope, It’s Not Over Yet!

The person doing the interview with Brent, Patrick Ogle, brings up a good point about some musicians that applies to writers:

“Some musicians new to recording think the work is all done once you finish recording. They are very shortly disabused of this notion”
– Patrick Ogle

Much like some musicians think the hard part is over once all their tracks are laid down, I’ve known writers who thought once the first draft of a novel was done that the work is over.

Anybody who’s revised a novel knows that’s not the case!

Rewriting can be painful. I have a love/hate relationship with it; many writers do.

One of the things that’s always helped me has been seeing Brent and other musician friends spend long hours poring over every little sound and working to make their music better.

As writers, we’d all do well to treat the words we write like the sounds musician make — taking time to make sure everything flows together until the words we wrote resonate from the pages.

Put the Ego Aside

Brent has produced a lot of music in his time. It’s safe to say that he knows how to bring out the best in a song.

But when it comes time to work on the masters for a recording, he often steps back and relies on others for help.

It’s easy as writers to think we know what’s best for all we do. In many ways, we do; it all comes from our heads, after all.

But we’d all do well to listen to trusted readers, editors, and other people with an ear for good writing — even if you’re a great writer and editor yourself!

While Brent knows the sounds he wants, he works with others to get there, and sometimes — because he’s open to suggestions and sets his ego aside — ends up with something sounding even better than he imagined.

In the hands of the right editor, your stories and articles won’t be totally changed (most likely), but they will be even stronger if you step back and listen to other people who know what they’re doing.

I challenge everybody to step away from reading another interview with your favorite writer and seek out interviews with musicians and artists in the first part of 2011. We can all learn so much by looking at the ways other creative people get things done.

You will see many similarities, even though what you do is different. And hopefully you’ll think about things in ways you never imagined.

If you need a good starting point, I recommend Chuck Jones’s Chuck Amuck (if you can find an affordable copy or find it in a library). It’s a book written by many people’s favorite animator; it’s one of those books that changed the way I think about so much.

And speaking of turning to animation for writing/creative inspiration, you could do much worse things with a little more than an hour than listen to this interview with voice actor, Billy West.

You may find yourself with a new respect for them when you see how similar we all are in our creative obsessions.

Oh! This is the 200th post on The Juggling Writer!