You are here: Home / agents / What to Do When You Finish a Novel 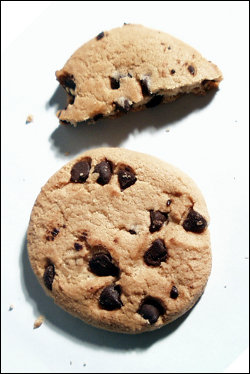 Many people feel like creating something big is enough, that in finishing a novel they’ve done all they need to do. If you write for yourself — and I’d argue there’s no better reason to write — you really have done all you need to do when you complete a novel. But most people writing novels hope to sell them.

It’s a nice thought that simply finishing and revising a novel is enough, that when the final page is printed, agents or editors will appear at your front door fighting over your book.

It takes a big effort to finish a novel. You definitely deserve to give yourself a cookie for having the fortitude to tackle such a big thing with all the other things going on in most of our lives.

But finishing isn’t enough; in fact, that’s when the real work begins.

Just because you finished your novel, it doesn’t mean you’re ready to start submitting.

This sounds like a given, but I’ve seen people who are just starting to write their first novels submitting queries. I’ve seen people online complaining about getting a form rejection letter for their hurried first draft.

If you’ve taken the time to write a novel, you owe it to yourself (and to agents and editors) to revise that novel.

I rewrote my most recent novel four times, and two of those times were full-blown rewrites, totally changing the story. (The other two were rewriting major scenes, making them better.)

I’m not the biggest fan of revising, but I know it makes a good book great. If you’ve taken the time to write a novel, you owe it to yourself to make it the best novel it can be.

The only way that happens is by revising.

While agents I’ve heard from say a platform for fiction writers is overrated, it doesn’t hurt to have one — if only for keeping writing on your mind and meeting people.

If I slack off on The Juggling Writer too long, I hear about it. What started out as a way for me to keep writing always on my mind and sharing what’s worked for me and some people I know has become something people look forward to reading. (And that’s one of the best feelings, so thanks!)

If you’re not a huge fan of blogging and social networking, start meeting people running bookstores. Think about ways you’ll help a publisher sell your books.

It would be nice if all a writer were expected to do was write and agents and publishers did the rest. But even Shakespeare and Dickens had to get out there and hustle!

It’s never too early to think about how you’ll let the world know you and your book exist.

It would be nice if booksellers put your book on a shelf and people rushed out to buy it.

When I wrote independent comic books, we went into shops and talked with the owners. We contacted companies with mailers, letting shops we couldn’t visit in person know all issues they got through the distributor would come signed. (We printed ahead of our submission to distributors and signed every order.) Those little efforts added up.

The average advance on a novel isn’t that much; you’re most likely not going to move a lot of books the first time out.

Knowing that booksellers in your immediate area are recommending your book because you made the effort to meet them may be as good as it gets early on in your career.

See where I’m going with this?

Blankets Are for Staying Warm

It might sound nice — it might even work — but if you’re not patient enough to research and target the right agents, why not self publish?

Agents representing literary fiction don’t want your love story about a paralyzed rodeo barrel racer and her centaur lover. Tor books doesn’t want your dissection of a broken family struggling with their identity while trapped in suburbia.

Agents are flooded with queries for the kinds of books they don’t represent all the time. They’re flooded, in part, because people send piles of queries from the start.

If publishing were a race, it would be an ultra marathon. You’re not going to see the finish line if you come out sprinting from the start!

And what happens when you send queries to 50+ agents and the agent near the bottom of your list — who may have a little more time available to them — contacts you sooner than the agent you dreamed about representing your work who takes longer to reply?

Blanket submissions are a sign of impatience; it’s a way of saying you don’t have enough confidence in your work to believe you stand a chance with some of the agents near the top of your dream list.

This is another one of those givens that some people don’t seem to get.

It’s easy to jump online and badmouth people who rejected your work. If you’re so inclined to be like that, chances are, your negative attitude comes through in most things you do.

Most people would rather deal with somebody skilled enough and decent, than brilliant and difficult.

Nobody likes an asshole.

Don’t spend all your time waiting for replies to queries when you’re done with that novel…get busy on your next book! (You know, that one you’ll revise over and over so it does better than the first book you revised over and over.)