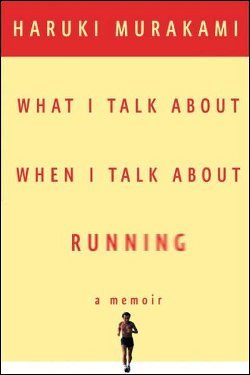 “Most of what I know about writing I’ve learned through running everyday.”

The parallels of running any kind of distance and writing are very similar.

There’s a sense of monotony, a feeling of “when the hell will this end?” There’s a certain kind of mental pain involved in both actions. Running and writing don’t require too much gear: for running, shorts and shoes; writing, a pen and paper.

You can run or write anywhere.

There is something else running and writing have in common: a quiet sense of huge accomplishment when a novel or big run is done.

I haven’t read too much by Haruki Murakami. My first exposure to his writing came when a friend loaned me a copy of Hard-Boiled Wonderland and the End of the World: A Novel (Vintage International)

(affiliate link). I liked the dreamy quality and duality of the storyline. I’ve read some Murakami short fiction, but that was it.

One evening while knocking around a bookstore, I was surprised to see What I Talk About When I Talk About Running in the athletics/running section of the store. I knew Murakami liked to run, but I didn’t know he wrote a book about running. Thumbing through the book, I noticed he also talks about writing in the book.

I’ve done a lot more writing than running in my life, but in recent years, I’ve started running here and there–it’s something I enjoy. So of course, I had to read the book.

This is definitely a book for runners, but if you like Murakami’s writing, or if you write and want to read a different kind of writing book, it’s worth reading. While I’ve never run a marathon (and don’t see a time in my life that I ever will), I agree with statements like:

“…writing novels and running full marathons are very much alike.”

It’s not a ground-breaking statement; I’ve heard writing compared to many hard things, including several female writers saying writing a novel is worse than childbirth. (I don’t see a time in my life that I ever give birth, either!)

Early on, Murakami tells readers that he’s not out to write pretty prose or do anything more than put down his thoughts about running and writing for himself. And that’s what I like about the book.

When he describes running the reverse course of the first Marathon run, the feelings he describes are similar to the ups and downs experienced when writing a novel. When he talks about those perfect runs when the weather is just right, it is a reminder of those times when all the words come together, like a cool breeze coming down a mountain when you’re starting to overheat.

Murakami does devote a couple chapters of the book to writing. Even if you’re a writer who hates the thought of running, it’s worth reading the sections he devotes to writing and what it takes to sit alone in a room for hours and hours, isolated from loved ones–even if it’s just for reassurance that you’re not alone in feeling like this:

It’s always nice when you hear writers you look up to dealing with the same nagging feelings as the rest of us. That’s nothing new to me, but I find it comforting–not because it means Haruki Murakami struggles with rewrites and a sense of perfection, but in knowing that if that feeling is always there, I should begin treating writing more like a race.

We can only do the best we can do in an allotted amount of time or distance (word count), but we can’t go back and rerun a race we just finished.

The best we can do is learn from each race and do better the next time we sit down to write.

From the morning I started running a couple years ago after playing tennis with a friend from work, I’ve noticed my writing has improved. When I walk, I think about writing; when I run, I think about nothing.

It’s an act of mobile meditation. I don’t feel a thing until I stop, but somewhere deep in my mind, I’m working on things I don’t seem to resolve when I walk and actively think about them.

Murakami is a writer who views becoming a novelist as a not-so-healthy profession. The sitting, the isolation, the inability to never stop working in his head…he sees it as a toxic act. I wouldn’t go that far, but I know what he means when he says:

“For me, the main goal of exercising is to maintain, and improve, my physical condition in order to keep on writing novels.”

“To deal with something unhealthy, a person needs to be as healthy as possible.”

Whether you run or not, I think every writer can find something worthwhile in What I Talk About When I Talk About Running.

Murakami’s rise from becoming the owner of a jazz club to becoming a revered writer in Japan and around the world is inspiring, and it’s all there in the book, step by step on the pavement as he runs along creating a life where he–

“…placed the highest priority on the sort of life that lets me focus on writing.”

That’s something we should all be doing if we really want to make it writing.

In Murakami’s world, there are no excuses. If you are “too busy” to write, you are simply not a writer.

“Exerting yourself to the fullest within your individual limits: that’s the essense of running, and a metaphor for life–and for me, for writing as well.”